The inland road from Sydney to Brisbane 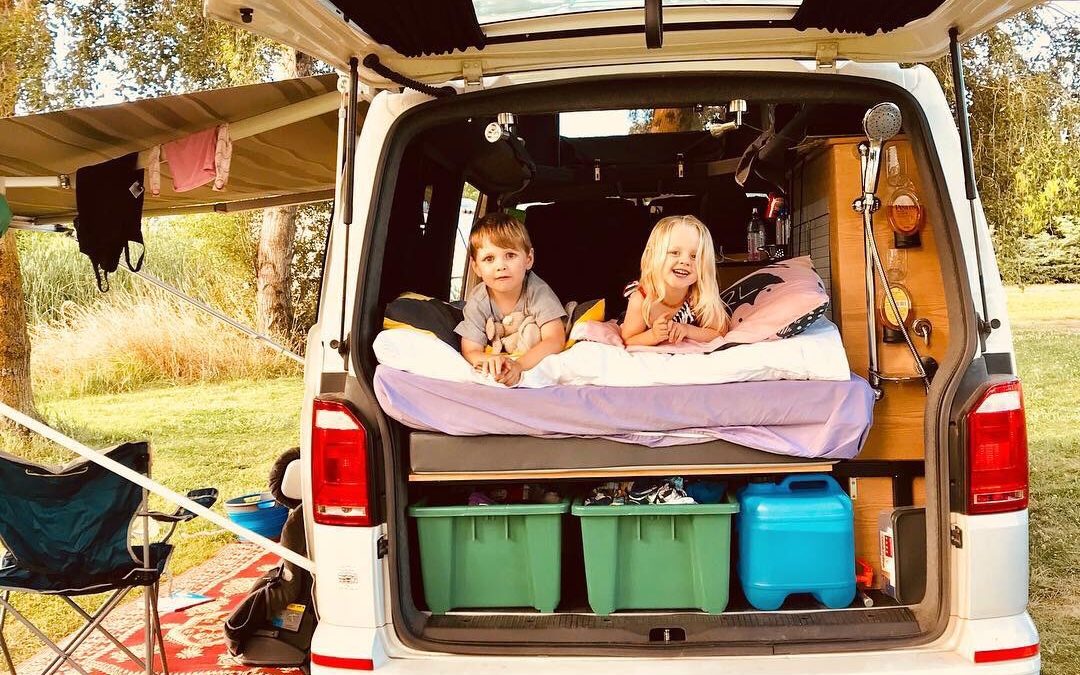 So, you’re thinking of driving from Sydney to Brisbane? You have a few options, one being the coast road and the other being the inland route…

After driving the coast road every time I did this trip over the years it was a spurr of the moment decision to go inland this time. I’m so glad we did!

The coast road is great if you just want to put your foot down and eat up road, but if you like driving through small towns and not past them, or you don’t mind a bit of free camping along the way then the inland road is for you.

This is our meandering along version. I wanted to share the things we saw along the way and the places we stayed when we did it with no particular plan.

If you are just wanting to get from Sydney to Brisbane efficiently with little people in tow then check out driving between Sydney & Byron Bay with kids.

That is the drive we do when we just need to get from A to B as easily as possible without the kids cracking it.

I’ve added a bit more info to that post and it now includes stop offs and timings that will get you all the way to Brisbane.

When you’re doing the inland road from Sydney north, you turn off just after Raymond Terrace, onto The Buckets Way, following signs to Gloucester. 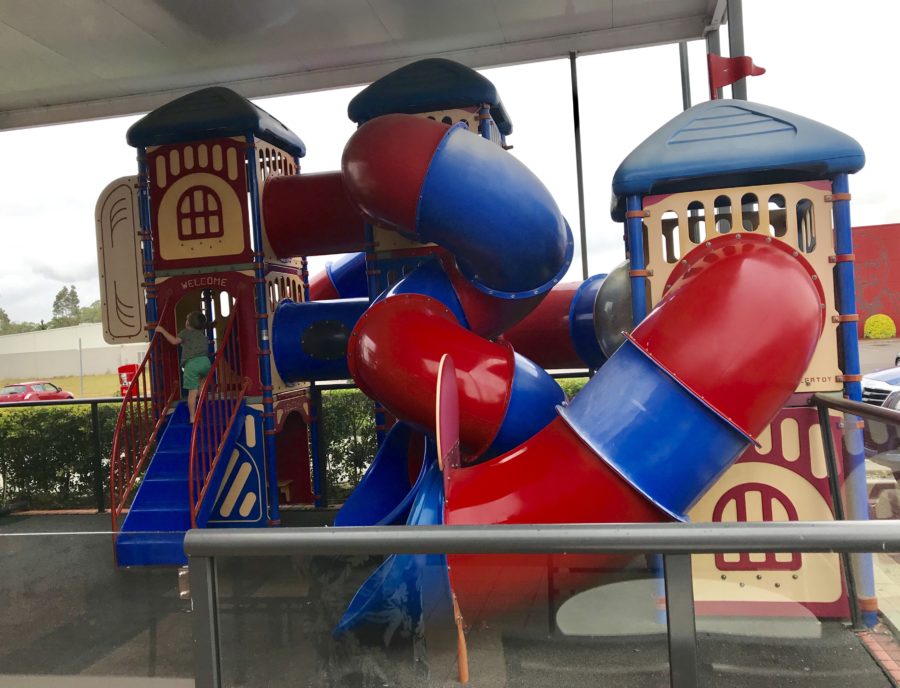 As I mentioned in the Sydney to Byron post, it’s the best choice out of a bad bunch but it’s bang on the two hour mark coming out of Sydney which is the point where my kids need out of the car for a bit.

The playground at Hungry Jacks is fenced and has enough in it that it keeps them occupied and lets them burn off some energy for half an hour.

You can find the playground at Masonite Rd & Pacific Hwy, Raymond Terrace NSW 2324.

You can park out front and enter the playground without having to go inside and just have a play. Or, I tend to grab a mediocre coffee to drink while I watch the kids, just to make myself feel better about using their playground 😉 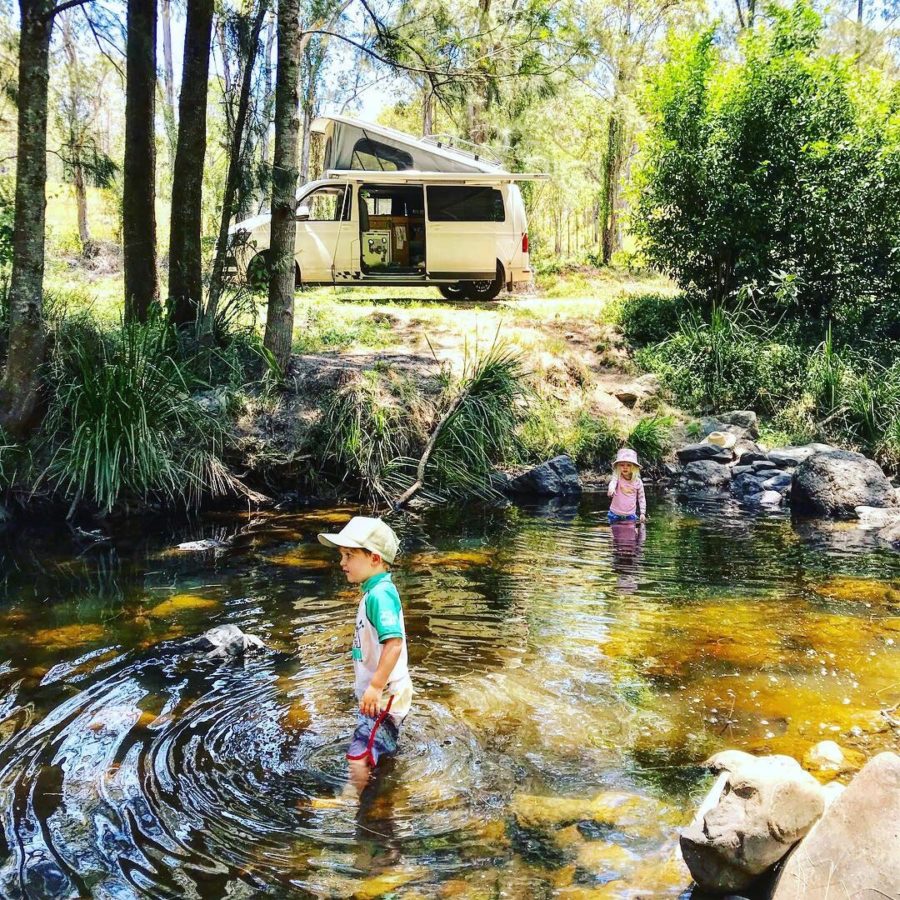 One of our first stops is always our fave swimming spot, Gloryvale Reserve, which is also an awesome free camp three and a half hours from Sydney.

Whether staying there or not it’s a great place for a break.

The creek is shallow so it’s safe for the kids but just deep enough for an adult to sit in it and cool down a bit.

It’s dog friendly, has bins and toilets and is right on the banks of the creek so you can be in the van or at the car doing food prep and still supervise the swimming at the same time.

There was only one other person camped there when we were there but I have heard that it gets busy so maybe be prepared to need a back up plan.

The good news there is that there is another amazing free camp, this one much larger, 10 minutes up the road. 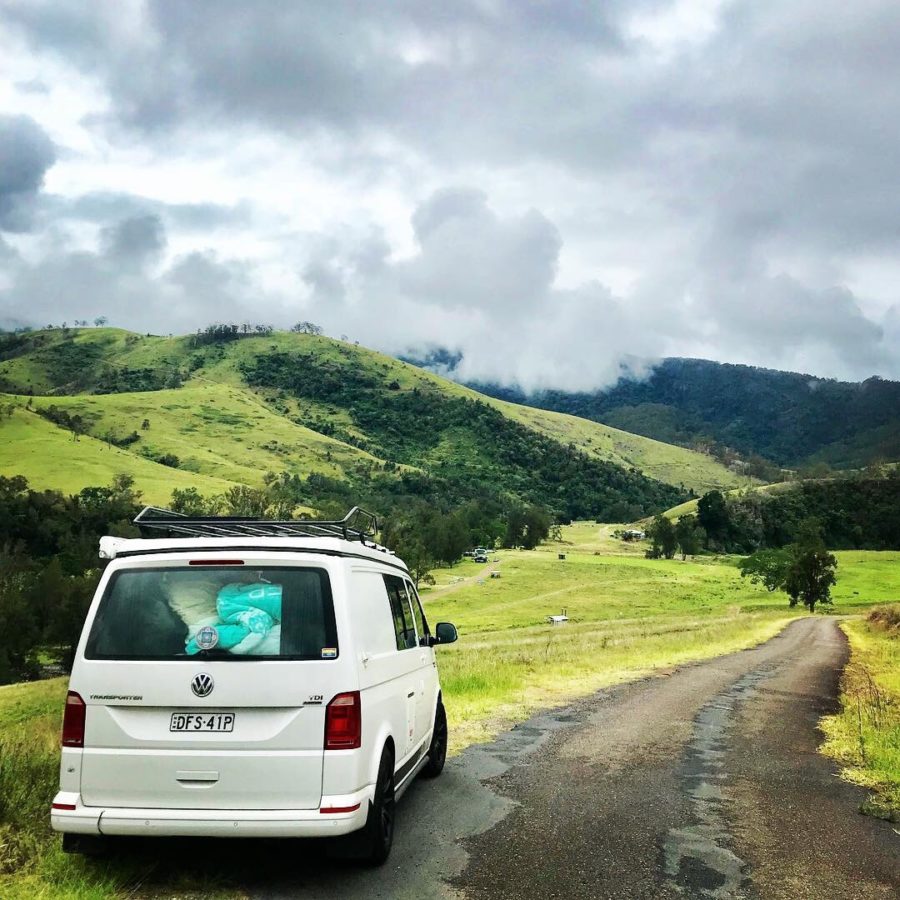 Bretti Reserve is beautiful, there is heaps of space and it’s nestled between mountains and beside a creek.

It’s big enough that even if it’s busy you shouldn’t have any trouble finding a spot.

When we were there it looked like there were a fair few people set up for a long stay and I got the feeling that it was a nice social spot to be.

There are bins, toilets and covered picnic tables and you are able to have open fires. 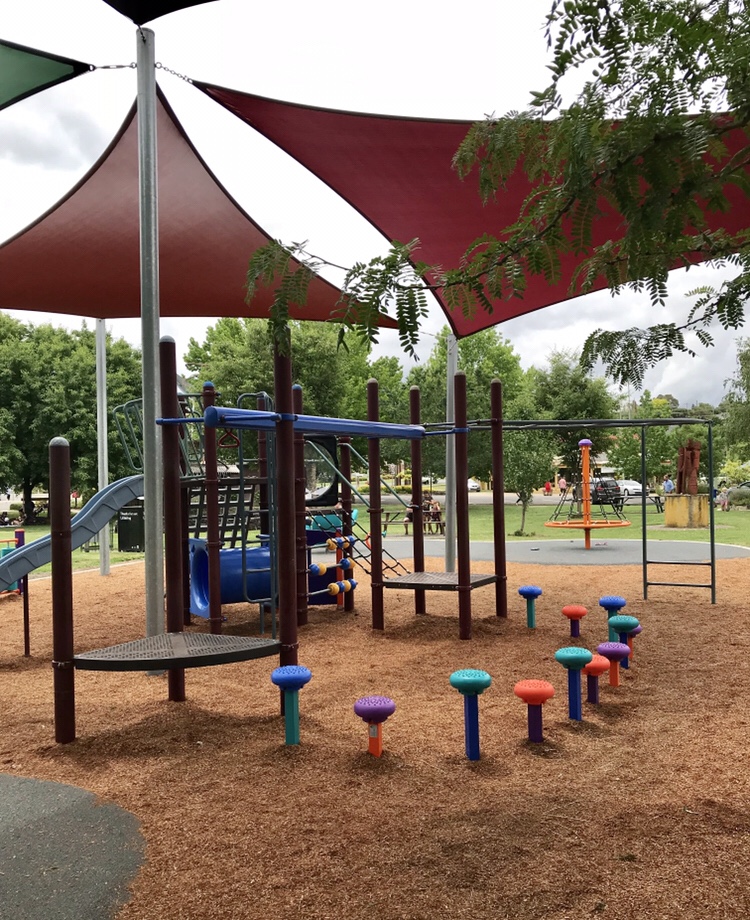 Our next stop for some lunch was Walcha, an hour and a half up the road from Bretti Reserve.

It’s a cute little town, heaps of craft and some cafes.

We stopped in at McHatten Park so the kids could play in the playground which you can find at 49 Fitzroy St, Walcha NSW.

It’s a relatively new playground and everything is in good nick.

You also have a number of picnic tables, lots of shade and plenty of grassed areas.

There is a whole lot of beautiful art and sculpture in the streets in Walcha, everywhere you turn there is something that catches your eye.

Even the pavements have cool mosaics. 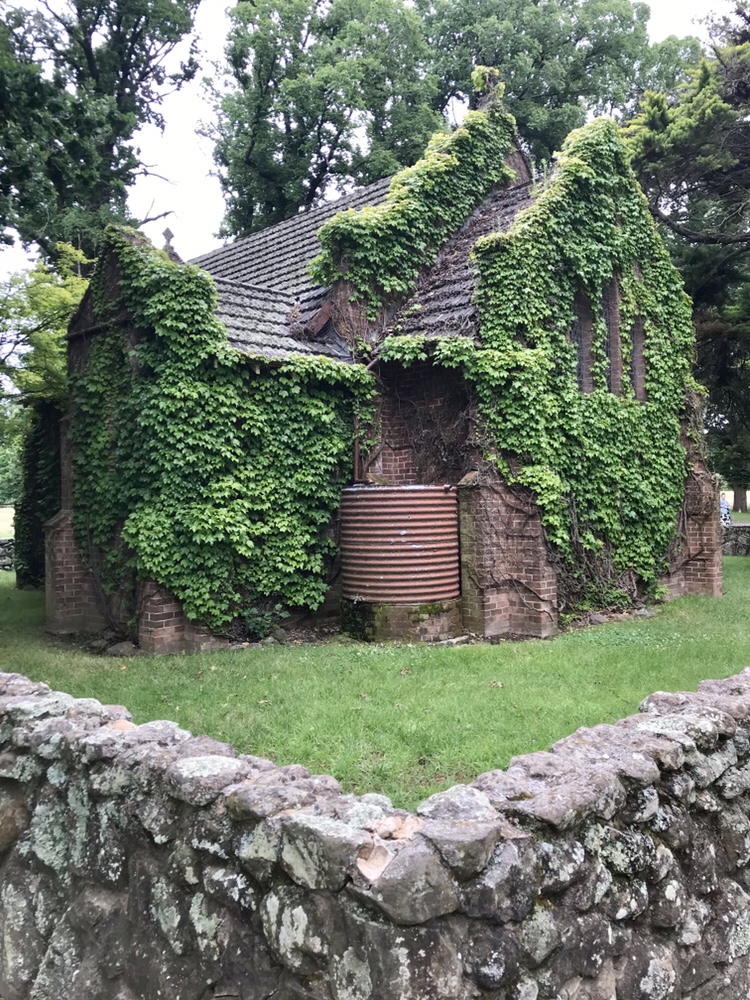 Half an hour up the road from Walcha is the most amazing little chapel called Gostwyck Chapel.

It is on private land but visitors are welcome to stop and have a look.

It is on a road lined with 200 of the most amazing elm tress which are really old and huge. 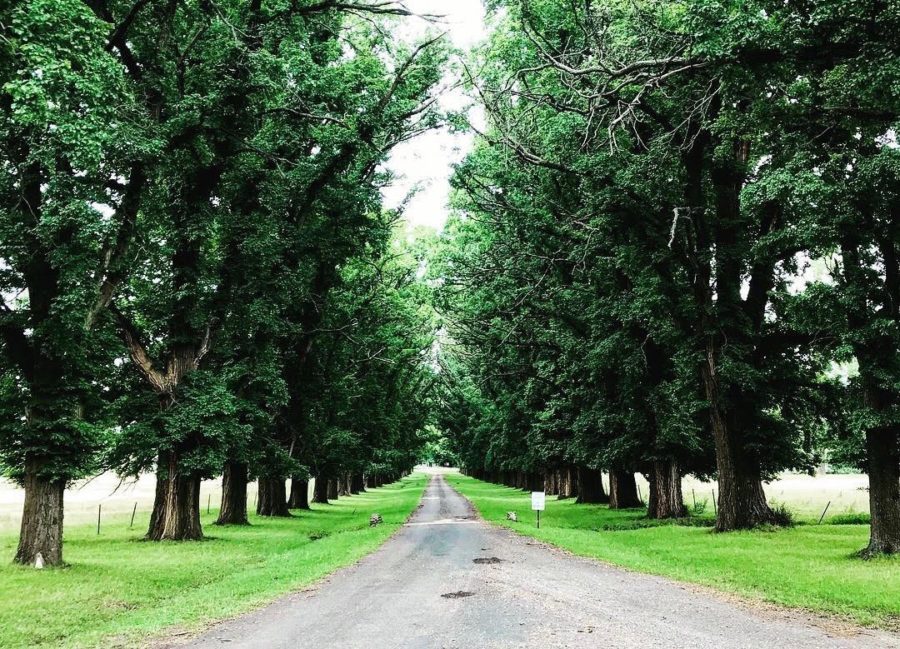 The best time to visit is in Autumn when the leaves are orange but we went in summer and it was amazing in greens too.

Google Gostwyck Chapel images to see what it looks like when it is covered in bright red leaves, it’s pretty amazing and you can see why it’s a favourite for photographers.

Just across the bridge is an octagonal woodshed which was built in 1872. It’s not open to visitors but it’s beautiful from the outside. 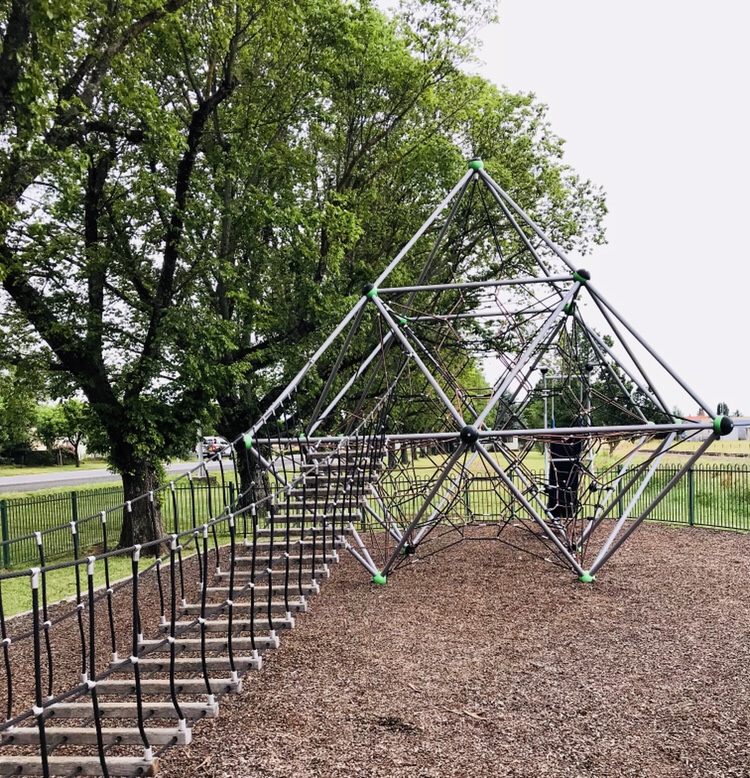 An hour up the road is Guyra, we didn’t have a wander around town but we did find a very handy playground right on the highway on the way through.

It is fenced and shaded and has a flying fox so even the 14 year old with us got to have some fun.

There are toilets and BBQ’s there too. It’s called the New England Highway Park and is sandwiched between the train tracks and the road, you can’t miss it.

Guyra is one of the highest towns in Australia with an elevation of 1330m.

This makes for a cool change which is perfect in summer when you’re sleeping in a van and don’t want to sweat it out.

There is a free camp in Guyra called Mother Of Ducks Lagoon Reserve.

We decided to stay there as it’s high up and we were hoping to avoid the crazy heat wave that was cooking us on the drive from Sydney.

It totally worked, thankfully, as we hit 42 degrees on the way up and I was a bit worried about cooking us all overnight.

We ended up sleeping under doonas at 14 degrees for the night which was lovely.

It feels really safe, is beautiful and grassy and it’s easy to get a nice private spot looking out over the lagoon. 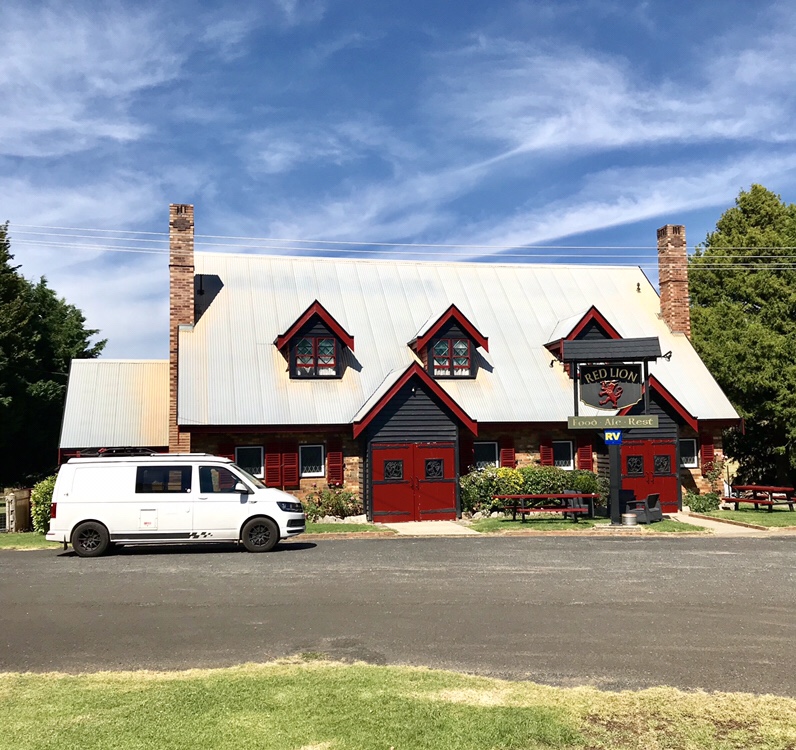 Half an hour north of Guyra is a lovely little pub called The Red Lion Tavern that I always admire on the way past.

This time I pulled in to check it out, it’s super cute and its worth the stop for sure.

They also mention on their website that there is “an external hot shower and toilet block to cater to holiday makers with caravans making day and overnight stops on site; as do the dog kennels at the rear of the hotel.” 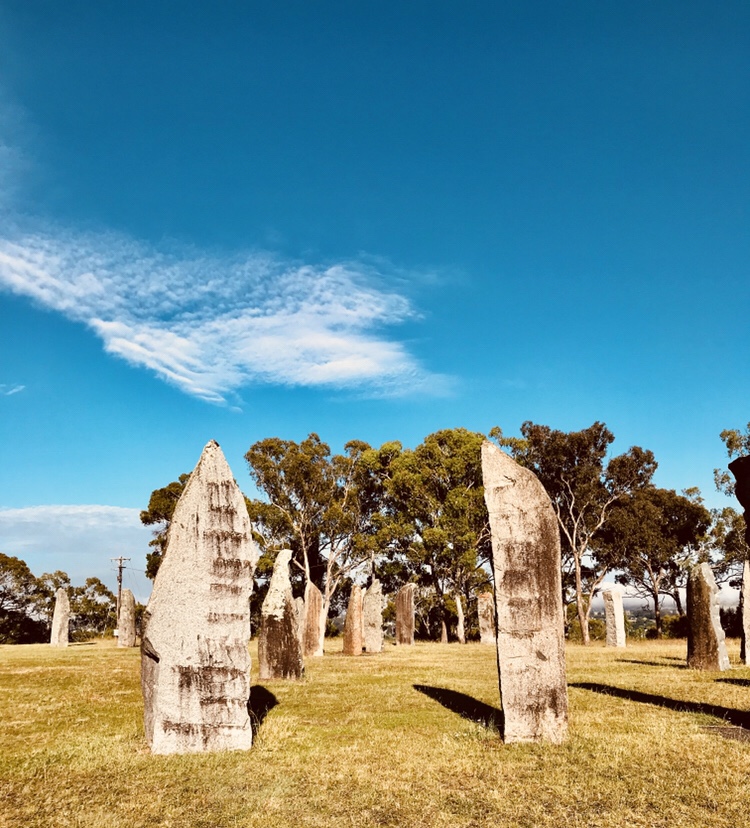 From here it’s 40 minutes to Glen Innes which, weirdly enough and unbeknownst to me until now, has a whole heap of standing stones.

Head to Centennial Parklands standing stones on Watsons Dr, Glen Innes to check them out.

The stones are pretty cool, there isn’t much else up there but you will find a cafe where you can grab a coffee or some snacks.

To have a read about the stones, when they were raised and why they are there head over to the Glen Innes Highlands website.

The Australian Celctic Festival is held here in May. 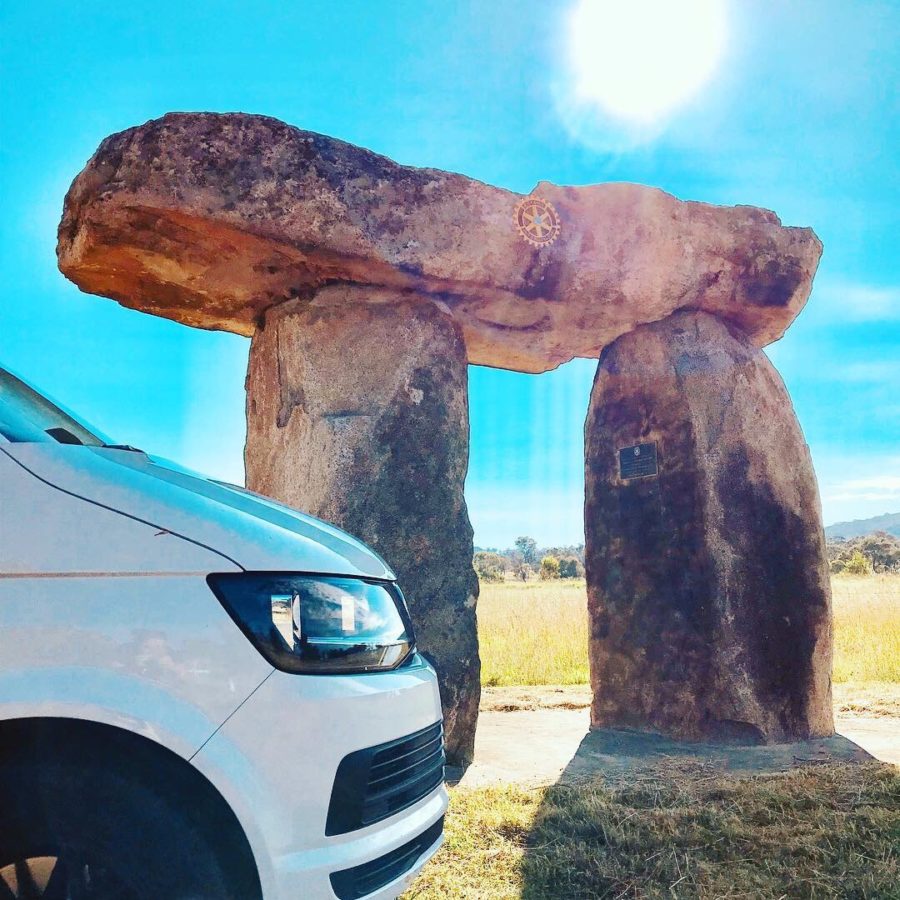 Just as you head out of Glenn Innes there is another handy free camp called Beardy Waters Heritage Park.

It’s not huge and it is close to the road but it is also grassy and shady and dog friendly. There are also loos and rubbish bins.

It’s on a creek and, it has its own standing stone! I don’t know why, but it’s pretty cool. 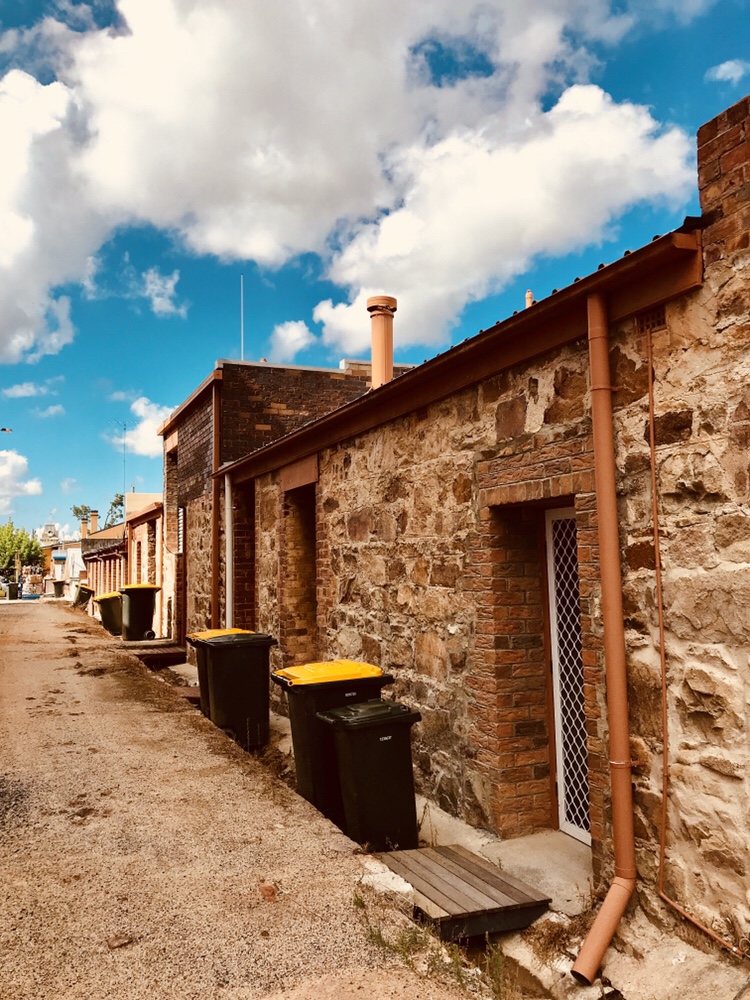 An hour up the road from Glen Innes is Tenterfield.

I was actually surprised by how lovely it is, there were flowers growing all up and down the main street and we managed to get a decent coffee on the way through.

It also totally satisfies my love of old buildings, as there is a fair bit of history there. It’s a bit of a bummer about the bins in this photo but the wall was so lovely! 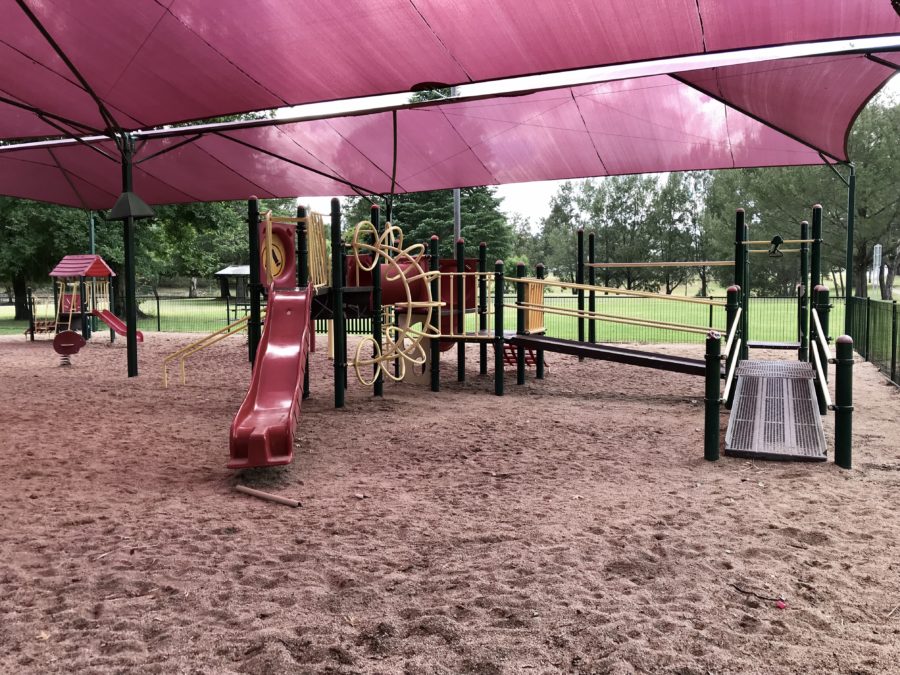 There is a large playground in Tenterfield called Jubilee Park.

It’s fenced, shaded and has toilets and a large park around it.

It’s located at 94-122 Manners Street Tenterfield, and there is heaps of parking right next to the park.

Our last stop before Brisbane was the Big Apple at Thulimba. 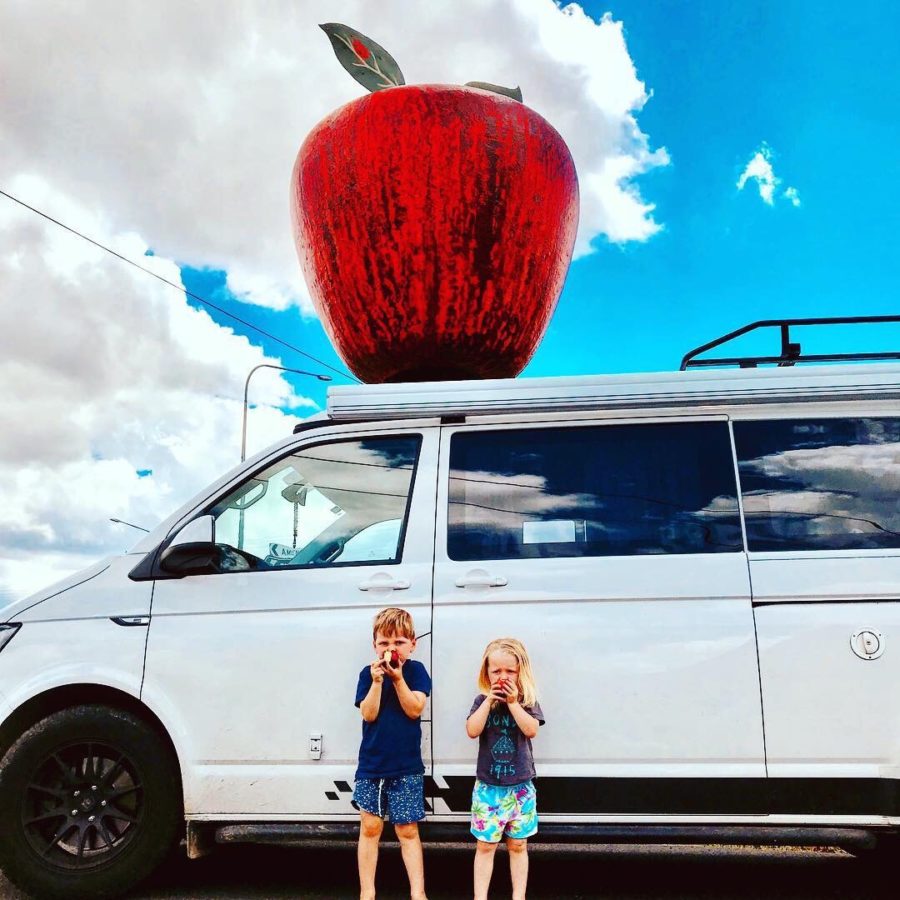 There is a cafe and deli there, and of course, a really big apple. Good for a snack and a photo op before you do the final leg to Brisbane.

The kids got a bit of a kick out of eating their apple under the big apple, it’s always the small things hey!

From the Big Apple you are approx 2.5 hours from Brisbane.

You head over a beautiful range with a big swathe of rainforest at Cunningham’s Gap. If you have time it’s worth a quick stop to check out the view before you head down the hill.

Well there you go, have fun!  Oh, before you go, be sure let me know if you discover any gems you discover next time you do the Sydney to Brisbane drive… 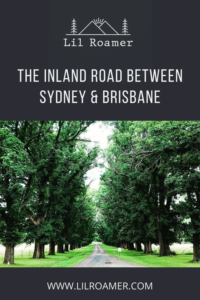 We’re all finding our favourite spots to hang. I

Not doing this was the hardest thing about being o

We are about to experience our home outside of sch